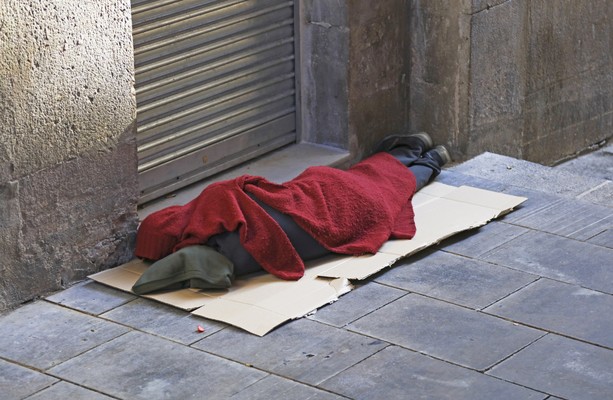 At least 168 people were sleeping rough in Dublin last night

THE NUMBER OF people sleeping rough in Dublin is at an all time high, according to new figures from the Dublin Simon Community (DSC).

Some 168 people have slept roughly in the capital overnight, an increase of 32% last year. This figure does not include the 60 people without beds in the night cafe at Merchants Quay Ireland.

The DSC today released its 2015 Annual Report, which includes the following statistics:

Speaking today, DSC’s Sam McGuinness confirmed the charity’s commitment to the government’s housing and homelessness action plan, Rebuilding Ireland, but stressed the need for details on how long-term homelessness will be treated.

â€œLooking at our numbers this month, we’re averaging 150 so far in September, with the number at 168 this morning. This does not include the 60 people without beds in the Merchant’s Quay night cafe. These numbers are similar to the numbers for rough sleepers in December 2014, which were the highest since the official count of the homeless in the Dublin area began.

With emergency beds throughout the city operating at full capacity every night, rapid housing and people support is urgently needed to get people off the streets to safety and to tackle the bottleneck in the city. emergency accommodation.

McGuinness said the DSC is “confident that the reconstruction of Ireland will have a real and positive impact on those devastated by the homelessness crisis”.

No news is bad news
Support the journal

â€œIn particular, the commitment to make 1,600 vacant housing units for use by 2020 and the tripling of Housing First’s targets in Dublin to 300 rentals by 2017, as well as 1,500 fast-construction housing units for families expected from ‘by the end of 2018 are essential.

â€œWe are also very encouraged by the raising of the social housing objective from 35,000 to 47,000 housing units, with a 40% increase in the social housing budget under direct construction by local communities and Approved Bodies.

Girls on the bill… but why?