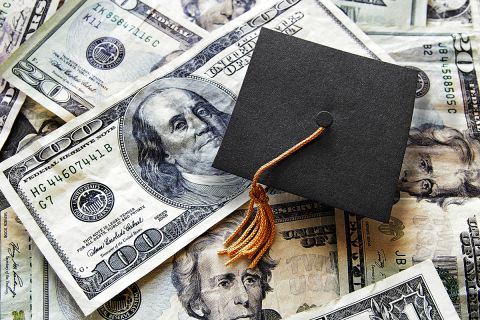 Canceling student loans could help 1.4 million people in Michigan. What there is to know

The parameters of a potential forgiveness program are still in debateas well as whether the Biden administration would try to enact the agenda on its own or go through Congress.

While tuition fees have skyrocketedstudent debt has increased by 248 percent since 2006 at $1.7 trillion nationally. It is now the second largest type of debt in the United States, behind mortgages. Almost a third of American families still in debt at 40.

White House officials expect to make a decision on whether to move forward with a loan forgiveness program by the end of the summer.

Here’s an overview of the matter, particularly as it relates to Michigan.

How Much Student Loan Debt Is There In Michigan?

One in seven Michigan residents currently has a student loan, $51 billion total. The average Michigan student now leaves college with $36,000 in student loans.

Can the president cancel student loans?

It’s not clear. So far, Congress hasn’t responded to Biden’s calls to pass bills to cancel student debt, so he could try to issue an executive order to do so, or as Harvard Law School report suggests, instruct U.S. Secretary of Education Miguel Cardona to cancel the debt through the Higher Education Act.

Not everyone agrees that Biden has that power, so any action would likely be challenged in court. But the Biden administration has already canceled $17 billion in college debt, for students who work in government, are permanently disabled, or borrowers who have been misled by unscrupulous colleges.

Aren’t student loans due only to young people fresh out of university?

Parents often take out federal loans to help pay for their children’s college education. And loans taken out by 18-22 year olds often take decades to repay.

In Michigan, 48% of existing student loans are among people aged 35 or older.

Which loans would be cancelled?

It is likely that only federal student loans would qualify. These loans include Direct loans and Parent PLUS loans held by the federal government. The Biden administration is not likely to forgive private loans because they belong to financial institutions, corporations and advisers.

According to the Education Data Initiative, approximately 2.4 million Americans have private student loans.

Would all my debt be forgiven?

The Biden administration is highly unlikely to write off all debt of 43 million federal borrowers.

White House officials apparently considering a pardon up to $10,000 per borrower. So far the the president pushed back against calls by Democratic congressional leaders to forgive up to $50,000 or all of the debt.

According to Federal Reserve Bankcanceling $10,000 in student loans per borrower would erase $321 billion in debt and eliminate the entire balance for 31% of borrowers.

Would everyone be eligible?

It is likely that the Biden administration would introduce income caps on student loan forgiveness. The Washington Post reported that the administration is considering limiting assistance to people who earned less than $125,000 or $150,000 in the previous year, or $250,000 to $300,000 for couples.

Sources who spoke to The Washington Post stressed that the plan was fluid and subject to change.

Would this only apply to existing debt?

So far, that seems to be the case. Those who have paid off their student loans or students who will enroll in university in the future would not be included. But stay tuned.

What is the argument for doing this?

Eliminating or reducing student loan debt could be an economic boost for the country, as people could use the money currently spent on student loan repayments for other purchases, such as cars, houses and starting new businesses. This is especially true for minority and low-income families, who tend to owe more and yet graduate at a lower rate.

For example, four out of 10 student borrowers did not graduate, which means they don’t get the financial benefits of college degrees, but get the debt. Among black students, 54% do not graduate within six years of enrolling.

Others argue that debt cancellation could narrow the income gap between white and black graduates. A study found that, four years out of college, black graduates owe $53,000, nearly double their white counterparts.

In a recent national poll64% favored some level of student loan forgiveness.

What are the arguments against?

People who already go to college earn more on average than those who don’t: $55,000 on averageone year after graduation, over $30,000 more than those with a high school diploma.

Thus, in effect, the benefit would go mainly to the middle and upper class.

The poorest 20% of Americans, by income, own only 8% of the total share of student debt.

Eliminating all or part of the current student debt is a temporary solution and does nothing to fix the exorbitant cost of university.

Do you have a tax refund? Here are the smartest things you can do with extra cash.

Should you ever take out a payday loan? Here’s what Dave Ramsey thinks