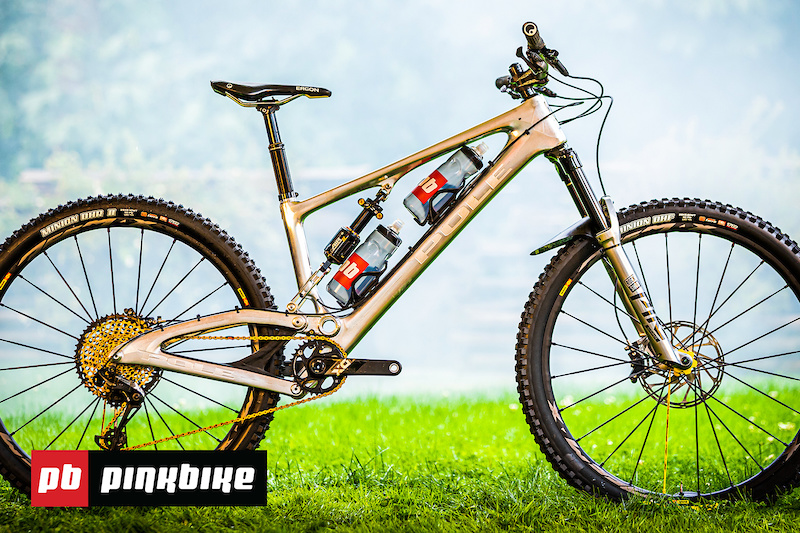 Words by Mike Levy, Photograph by Trevor Lyden
The Pole Stamina 140 EN was always going to be the most interesting bike in the Field Test. There are no bolts or welds on the frame. Instead, two halves are machined from 7075 T6 aluminum before being glued together. Yes, stuck together. This is a scaled-down version of their Stamina 180 designed for track bikes.

The EN model reviewed here costs US $ 6,940 as pictured, a notch below the Gucci LE spec, and Pole offers a few different frame / shock configurations as well. Our test stand features a 150mm Pike Ultimate, but you can go up to 160mm up front, while a four-way adjustable Cane Creek DBair IL shock takes care of the 140mm of travel. of the rear wheel.

While the Norco, Orbea, and Intense are all full-size test bikes with a range of between 474mm and 480mm, Pole has a slightly different size chart; our stand has a reach of 470mm, which they say is ideal for someone between 5’7 “(170cm) to 5’11” (180cm). In other words, the size is a bit unconventional so be careful if you order from their website.

The Stamina 140’s numbers may not seem as far-fetched as they would have been a few years ago, but Pole is still pushing the boundaries with the 78.6-degree seat angle. For comparison, that’s 4.6 degrees higher than what you’ll see on the Intense Primer. The Stamina has 450mm long chainstays and a 64-degree steering angle, all should add to a very powerful machine on the descents.

The wild-looking front triangle is mated to an equally wild double-bond rear that is also machined from aluminum before being glued. The upper and lower links rotate in the same direction, each on solid aluminum axles, with the lower link rotating concentrically around the threaded shell of the bottom bracket. You can take it all apart with a set of hex keys, bottom bracket tool, and rubber mallet, while all frame components are available direct from Pole.

The Stamina is of course focused on the descent, but with 140mm of travel it doesn’t get a free shuttle truck pass. Fortunately, it’s a relatively efficient bike that, while a bit bulky when really tight and slow, doesn’t lose much to the Optic, Occam, or Primer on the climbs. At first, the steep seat angle feels like you’re rolling your hips forward strangely, but I quickly got used to it – and saw the benefits – to the point that a number more traditional would not be enough for me. It helps hide a lot of the length of the stamina, but the long center back will still be a pain in the ass through tight laces.

Like most trail bikes these days, the Stamina offers good uphill traction that helps its cause, but you’ll want to sit still for the most grip. In fact, it’s by far the best way to get the silver pole to the top of anything; keep your butt planted and in a straight line through the roots that lesser machines have to bypass.

Congratulations to the three (3!) Locations of water bottles at the great pole; there are two inside the spacious front triangle, then a location for the giardia-catcher under the down tube for free hikes. The catch is, you’ll probably have to use the supplied FidLock system to insert two large bottles, as we couldn’t quite fit the two standard bottles at the same time.

If this thing is a track bike, maybe I should consider buying a trophy truck as a daily driver? I should do it anyway. Unsurprisingly the Stamina 140 is the most proficient descender in the bunch, Kazimer and I noted how calm and composed it was on our test laps. When it was wet and sleazy, it felt a little less sleazy on the pole than the others, although the bike could have slipped just as much. The difference? The Stamina’s 450mm butt, to start with, and the 64-degree head angle that work together to provide a central and secure riding position between the axles, perfect for going too fast.

Timed tests have proven the Stamina to be the fastest bike for me (and the second fastest for Kazimer), but it manages to do that weird lap where it feels calm. Of course, then you should speed up a bit, which is exactly where the Pole likes to live. On your personal limits, your own advantage, I don’t think you will find a trail bike that will get you away with that much.

Ah, the corners. Being so long and soft, it has to suck in corners, right? Yes and no. At high speeds, and especially if it’s hilly or if traction is dangerously low, it’s noticeably easier to carry more speed on the Stamina 140 than other bikes in this class, but that’s another story when the trail narrows. The impressive stability is nice, but it is undeniable that the pole is not small. I suspect that a relatively timid rider would find the length a burden if their trails aren’t fast enough often enough to take advantage of the endurance balance when noisy.

Handling, while impressive, won’t suit everyone, as will the Stamina’s rear suspension. It’s a really deep feeling bike, and I’m not exaggerating when I say it would trick a lot of riders into thinking it still has 20mm of travel. Hit rock bottom? Sure, the o-ring says it happened, but I can’t remember where or when. It’s also reasonably flexible at the other end of the stroke, but no amount of button manipulation could bring much life to the shock; planted rather than playful, no doubt, but that could change if another shock was used.

Conclusion: The Stamina 140 is a bike that stands out both in its appearance and in the way it rides. In terms of a trail bike, there may be nothing else quite as capable when terrain or speed is serious. Interestingly, Pole did this cool ride because it’s always a blast when the ride is tamed, only being muffled at speeds close to the track where I would likely fall anyway.

See the vertical supports with the big crimps? We were accidentally sent a prototype lighter swingarm with thinner mounts that warped during our flat shoot.

– Not as easy to throw and struggles on tighter ground
– It is not carbon (and the original one is 98g heavier than ours)
– Oh shit, he broke …