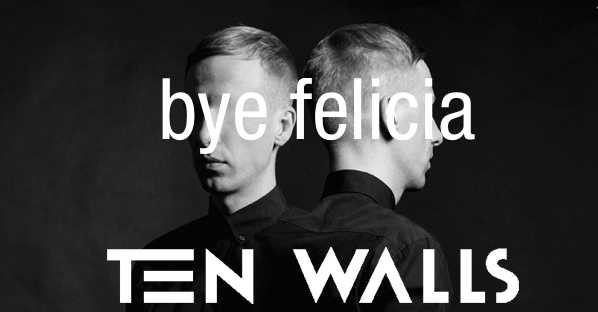 Last year I interviewed Anna Lunoe upstairs at Q Nightclub in Seattle while Lithuanian producer and DJ Ten Walls performed under us.

During the interview, Lunoe spoke about the importance of calling people up on their bullshit because the internet makes people feel like they can be as mean as they want without consequences. She said:

â€œPeople are fucking weird on the internet. They say really horrible things to people. It’s like no one realizes that they are actually telling someoneâ€¦ People have so much shit going on and they say the dumbest things. I just think it’s important to shoot them.

Now, in a turning point in poetic justice, Ten Walls’ career is over because he said horrible and ignorant things online.

He posted an update on his personal Facebook page which according to Gay Star News translates to:

â€œI remember producing music for a Lithuanian musician, who tried to brainwash me so that I didn’t have to be so conservative and intolerant of them. When I asked him “what would you do if you found out that your 16 year old son’s browny (anus) is ripped apart by her boyfriend?” Well, he was silent …

In the good 90sâ€¦ these people of different races were fixedâ€¦

One of my first concerts in Ireland, on my way to [my] hotel I saw a church with a fence decorated with hundreds of baby shoes. Of course I wondered why? Unfortunately, the lie of a priest for many years was uncovered when children were massively raped. Unfortunately, people of other races continue to do this and everyone knows it but does nothing.

Ten Walls’ music is heavily house influenced, but he clearly does not know the history of the genre.

A post on the Ten Walls Facebook page apologizes for the statement, saying he has decided to take a break from his tour. Ten Walls didn’t really make that decision, the electronic music community made the decision for him.

Ten Walls has been pulled from a long list of festivals and shows, including Creamfields, SonÃ¡r, HARD Summer, PITCH, Urban Artforms and more. His booking agency Coda Music let him go. Phonica has canceled pre-orders for their new album.

Fort Romeau and Jimmy Edgar have retired from Ten Walls shows. Everyone from the Chemical Brothers to Kastle, Eats Everything, Arca, LOUISAHHH !!! and A-Trak spoke out against him.