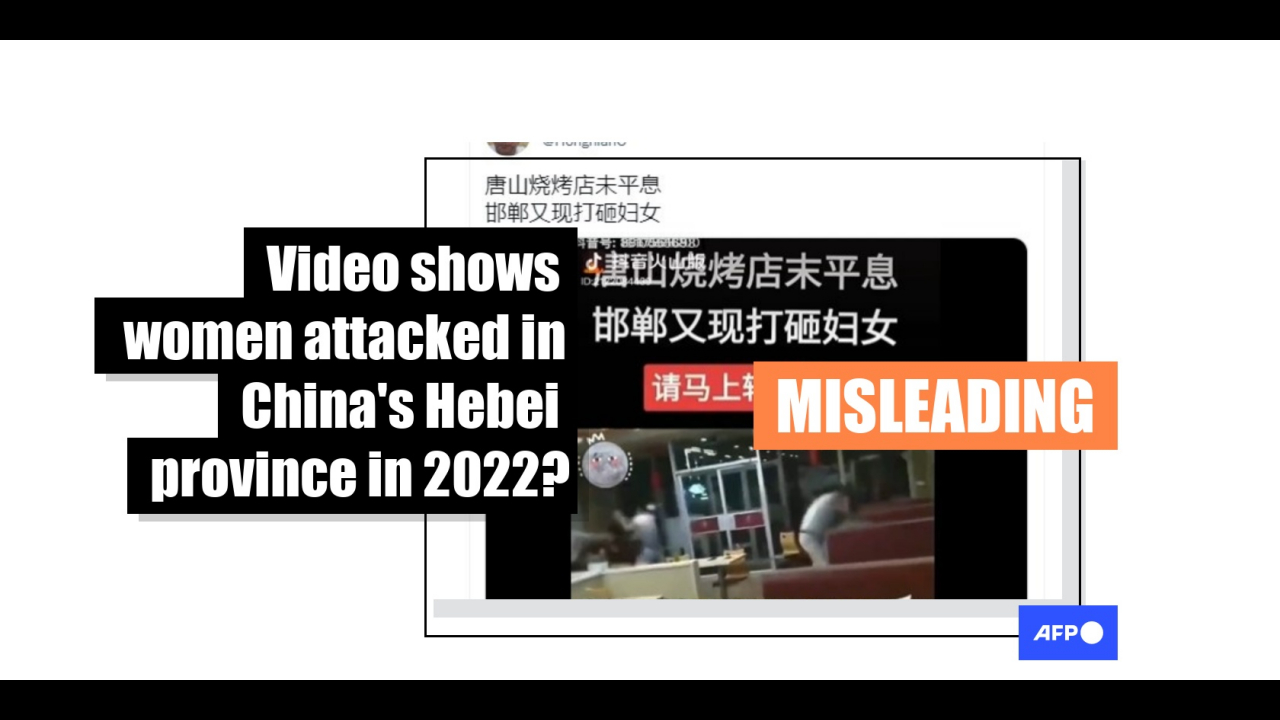 Violent footage of a man beating two women has been viewed thousands of times in Chinese-language social media posts that claim the assault happened shortly after a brutal attack in China’s Hebei province that caused outrage in the country. However, the clip was shared in a misleading context; it circulated online in reports stating that it was filmed in Hebei in August 2018.

The video, which appears to have been filmed inside a restaurant, shows a man hitting a woman with a chair before hitting her and banging her head repeatedly against a table.

He also hits another woman – who appears to have come to stop the assault – with a chair, before kicking and punching her, then hitting her in the head with a chair.

The video’s Chinese caption translates to: “The Tangshan barbecue incident hasn’t even calmed down; women were again beaten in Handan.

Handan is a city in Hebei province in northern China.

The post circulated days after viral footage of a violent assault on a group of women at a restaurant in Tangshan – also in Hebei – sparked outrage over predatory sexual behavior.

The Tangshan incident has rekindled an online debate about sexual harassment and gender-based violence in China where the conversation about women’s rights has grown in recent years despite pressure from a patriarchal society, internet censorship and uneven legal support.

Simplified Chinese characters superimposed on the video in the misleading post claim it shows a “follow-up” to the Tangshan attack.

The video was also shared with similar claims showing a “follow-up” to the Tangshan incident on Facebook and Douyin, China’s version of TikTok.

However, AFP found no recent reports of a similar attack in Handan following the Tangshan incident.

In fact, the video shared in the posts predates the Tangshan assault by more than three years.

The report that featured the video was titled, “Hebei Handan: Three Men Clashes With Nearby Diners While Eating and Brutally Beat Women With Stools.”

Below is a screenshot comparison of the video in one of the misleading posts (left) and the clip in the WeVideo report (right):

Local news organizations Guancha and Beijing Time also reported on the incident in 2018 and featured corresponding clips in their articles.

Reports say the incident happened in Yongnian District of Handan.

Two suspects were initially arrested for the attack, according to an incident report released by the Yongnian Public Security Bureau.