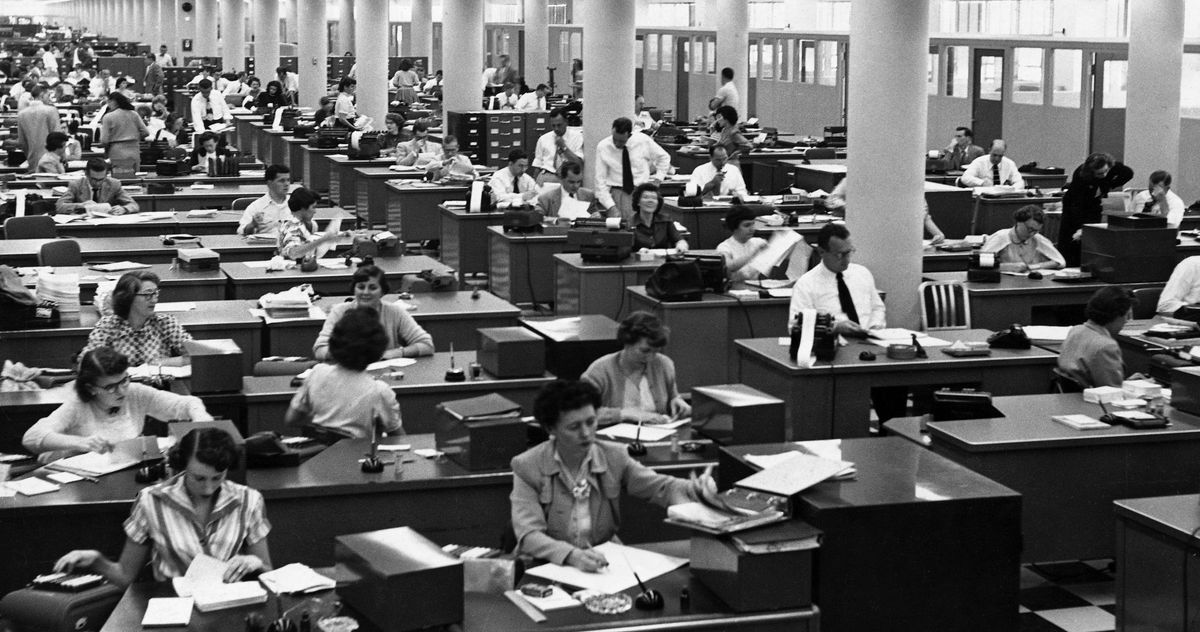 Return to the office; The workers resist it

According to the bosses, the office is sacred. It’s a space where the walls practically vibrate with possibilities. Apple’s Tim Cook said People last March that he couldn’t wait to get back there and relive some of that magic. “Innovation is not always a planned activity,” he said. “It’s crossing paths during the day and pushing forward an idea you just had.” Hearst management told Insider a similar story: Pushing people back to the office despite protests from their union “reaffirms our connectedness, builds our community, and helps foster an environment of creativity and global collaboration.” Goldman Sachs CEO David Solomon, who has called remote working an “aberration” and inspired the smallest of uprisings among his firm’s junior bankers, says Fortune in February that the company’s “secret sauce” is when young recruits “get together and collaborate” with more experienced employees.

There is some truth in all of this. People like to see their colleagues face to face, like to collaborate and, above all, like to separate their professional life from their personal life. In-person work is often fine, it’s just that cultivating the kind of environment described by bosses in their odes to the office – natural collaboration, mentoring, spontaneous creativity – is a different project than simply bringing people back to the center- city ​​as we ride through COVID waves. The reality of the office is often miserable: people are stuck on long commutes to arrive at mostly quiet offices and attend pointless meetings; junior employees quit because they don’t see a career path and don’t have mentors. The fantasy that many employers have of the office been – the story of why we have to come back – is currently colliding with reality. The office isn’t the problem, it’s the job.

When you look beyond employees protesting back-to-work policies, there are almost always other signs of greater discontent. At the root of Hearst Union’s complaint to the NLRB was the fact that management was making a “unilateral changewithout negotiating with employees and listening to their needs. In other words, it was a symptom of the culture that inspired workers to organize there in the first place. “It’s not that we never want to set foot in one of our sites again,” a Hearst staff member told me. “It’s more than the requirement to be one-sided and to be passed down from above without our input and frankly treating us like children – that’s the problem.” People often cite commuting as their number one return-to-work complaint, which makes sense when you consider how long a person spends commuting to and from work. In New York, the average travel time is nearly 40 minutes one way. Add that to an eight (or nine or ten) hour workday and you’re wasting virtually all of your waking time working. Last year, a group of Goldman analysts sent their bosses a list of grievances, including having to work 105 hours the previous week. (It may be hard to shed a tear for a banker, but the problem of overwork is endemic.)

And as much as employers talk about interaction, the modern office is often a place where one is going to be alone among others. A 2019 study by Ethan Bernstein of Harvard Business School found that contemporary open offices actually resulted in 70% fewer face-to-face interactions. “It was a bit of a thorn in the side of many people who had claimed they could open offices, get more density and cut costs, and at the same time they were increasing their income by getting more creativity and of collaboration”, Bernstein mentioned. For many white-collar workers working in open-plan offices, the study’s findings may seem more or less intuitive: often the office is just another place to use your laptop silently, with headphones. “It’s very quiet,” a Hearst employee told me after returning to the office part-time. “And it was pretty quiet before because we mostly sit around computers anyway.” In the open offices I’ve worked at, at nonprofits, and in the media, I’ve had conversations all day with colleagues on Slack or email without ever speaking out loud.

When the open office encourages conversation, it can be difficult for others to concentrate. Jennifer Tsang, chief of staff who has worked for Cisco for more than 20 years, told me that when the company moved from cubicles to an open floor plan, things got considerably noisier. Crosstalk has become troublesome. But Tsang loves her job and one of the reasons she’s stayed so long, she says, is the company’s flexible work-from-home policy. Basically, she can concentrate at home when she needs to. “The paradigm should move away from, Should we be in power, shouldn’t we be in power“, Tsang said. “We have to recognize and accept that people have a life outside of work and it’s about finding more balance.

So, at one level, the push back is about preserving some of the things that we have come to associate with work but which are not themselves work: the grip of commercial real estate and developers on our cities, the economies that are growing around office districts (small businesses from downtown to the financial district have seen a major drop in foot traffic), and – perhaps most crucially – the legitimacy of certain jobs and functions jobs (a level of non-work that the late anarchist author David Graeber called “job bullshit”). “I suspect some managers have been alarmed by the apparent ability of many workers to do their jobs better when they don’t have to interact face-to-face with their supervisors,” Elizabeth Anderson, professor of public philosophy at the University of Michigan and author of the book Private Government: How Employers Rule Our Lives, wrote in an email. “Managers feel the need to justify their work, which is difficult when workers don’t need them to do a good job. Bringing them back to the office helps mask this fact.

Anderson, who supports in private government that workplaces operate as petty autocracies and places of extreme surveillance, was also quick to point out that remote work does not free the worker from the watchful eye of bosses. In many ways, the “tyranny” of in-home facial recognition apps that track workers as they look at the computer and alert their bosses when they turn away, may be “worse than being physically watched by a boss. human who can’t keep eyes on every subordinate all the time. Bosses can also monitor simple things like when employees log in, send messages, and make phone calls. At real estate data firm CoStar, for example, Insider reported that remote employees were so closely monitored by their managers that one was reprimanded for walking away two minutes longer than the 15-minute break. minutes allocated to him. (About 37% of the company’s employees left last year.) Overall, companies have stepped up their home surveillance efforts to track their employees’ movements and productivity. “Technology has already been designed to monitor home workers, and in some cases it’s even more intrusive that way, because the employer can see what’s going on at home, with family life,” said writes Anderson.

Questions of control, and who has it, are ultimately the root of these problems. In recent months, amid a tight labor market that has given workers more power to quit jobs they don’t like, many employers have relaxed their return-to-work programs. (As my colleague Kim Velsey said, “Junior bankers are winners.”) Those who haven’t run the risk of seeing their employees leave for a more accommodating workplace. Meanwhile, many companies, especially in the tech industry, are trying to bring people back to the office, rather than coercing them, by offering bespoke amenities – free food, private Lizzo concert, basket weaving lessons.

But the solution isn’t the benefits, or even the sophistication of the hybrid workspace. If work and the conditions around it continue to suck, so will the office.

Because workers have been talking a lot, especially in the past two years, about the conditions they find most conducive to being productive (and happy). Instead of bosses and politicians shaming people back into office, they could hear the frustration of their employees and their constituents with the way things are currently working. Cities and states could invest in public transit to help people get to work quickly and on time, build truly affordable housing that allows people to live close to where they need to be, and create a system universal childcare that relieved working parents. . The four-day (or three-day!) work week could become a more typical schedule, since we already know it bodes well for productivity and worker satisfaction. Every workplace could have a union so employees wouldn’t feel like they were at the mercy of their bosses’ whims when it came to managing their time and structuring their lives outside of work.

The modern office once seemed unchanging. The pandemic has revealed that for lying it has always been. As Miya Tokumitsu wrote in The New Republic in 2017, “employment contracts create the illusion that workers and companies have reached a mutually satisfactory agreement”. The illusion, now shattered, asks us to consider other possibilities. Negotiation is not exactly or the worker is recalled, but for what. If it’s the same long hours, the same interrupted commute, and a fridge full of free seltzer water, is there any surprise that more people are saying no?