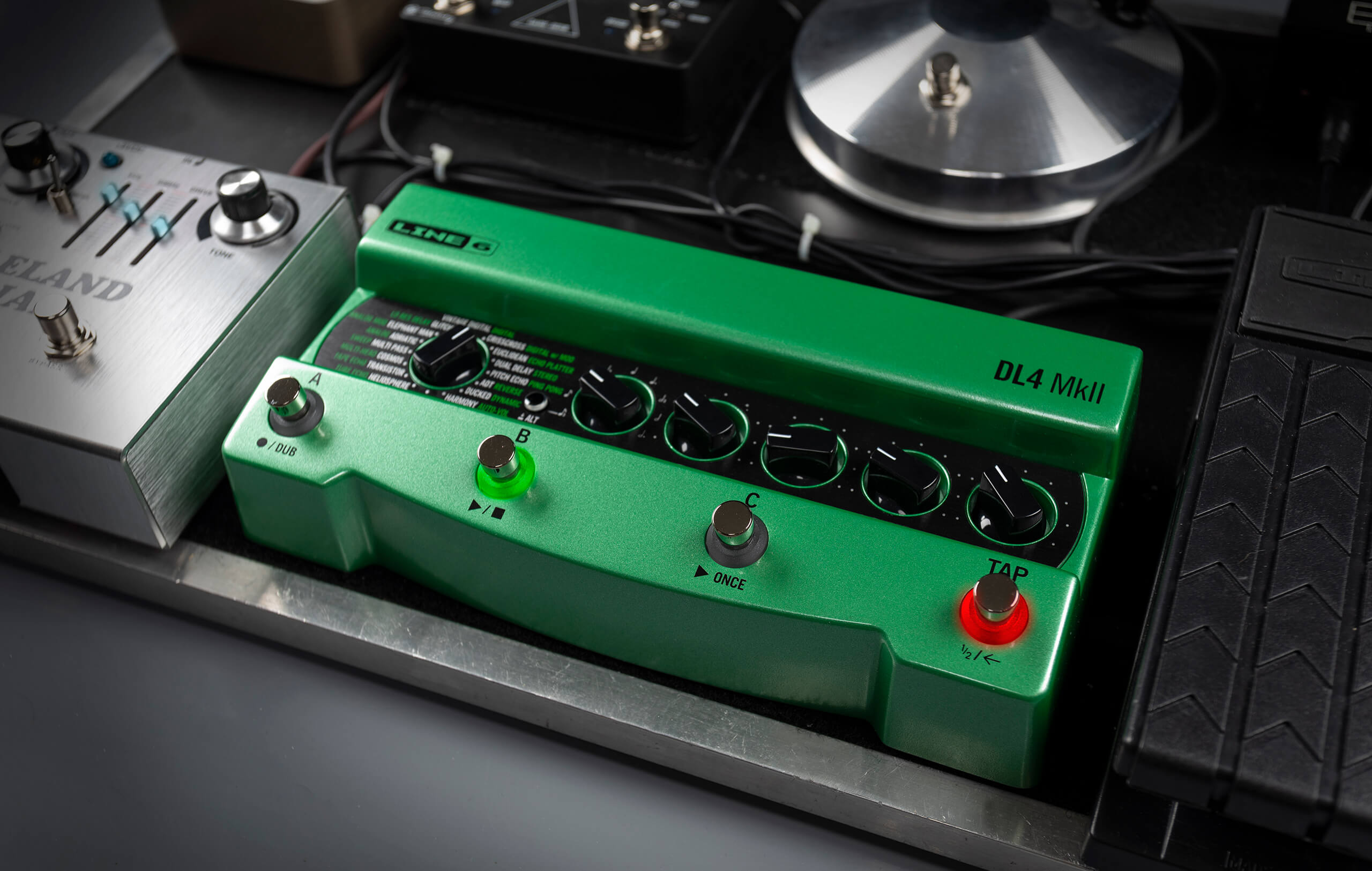 Isn’t digital technology supposed to become obsolete after a few years? Obviously, the Line 6 DL4 modeler and delay looper, a staple of professional pedalboards around the world since 1999, didn’t bother to read that part of his job description.

But retirement has finally arrived for the hugely influential green hunk, replaced by a lighter, more powerful model that aims to take on the new generation by doubling down on its delay algorithms and adding a whole heap of reverbs. So can the DL4 MkII live up to its extraordinary pedigree?

Well, it’s still green to begin with. In fact, in terms of design, it’s clear that Line 6 has been careful not to upset fans by straying too far from the format of the original pedal.

Gone are the slightly silly ‘future retro’ stylings, as is space up front for four massive torch batteries (it’s mains-only), while the control panel is black instead of silver. But the knobs and footswitches are the same as they used to be, including “tweak” and “tweez” dials that alter different parameters depending on the model selected.

There is, however, a crucial addition to this panel: a small button marked “alt/legacy”, which allows you to switch between two banks of delay types on the rotary switch. This means that in addition to the original DL4 sounds – plus the looper – you get 15 new sounds taken from Line 6’s HX processors.

Perhaps most importantly, you also get the unexpected bonus of 15 reverb algorithms, accessible by holding down the legacy button while flipping the main switch. Line 6 calls these “secret reverbs” but, let’s be honest, that’s just because they couldn’t find a place to list them on the panel. Either way, this is clearly a major addition to the DL4 offering.

As for additions, the maximum loop time has been increased from 28 seconds to four minutes, or two minutes in stereo, which can be extended almost infinitely via the microSD card slot on the back. There’s also an XLR microphone input with its own preamp gain control, along with full MIDI connectivity and, as before, an input for an expression pedal.

We can’t wait to get stuck in, but there are other features to mention first, thanks to some global settings accessed by holding down the legacy button and pressing the footswitch together. Highlights here include a one-switch looper mode (no doubt inspired by the TC Electronic Ditto) and the ability to turn that tap switch into a ‘squeal’ button that momentarily maximizes repeats. There’s plenty more, including full bypass and through-dry options – you might want to check the online manual for the full list.

If, on the other hand, you’re a hardened manual plumper, fret not: the DL4 MkII comes with a cheat sheet that goes through the basic controls on one side and lists all the delays and reverbs in the another, as well as with the ‘tweak’ and ‘tweez’ functions for each of them. It’s a handy little reference tool.

No record or gig has ever been marred by a bit of background noise, but that doesn’t stop some of us from worrying about background noise in our signal chain. So it’s worth pointing out that, while the DL4 MkII isn’t unpleasantly sibilant, it does create a bit more operating noise than the Walrus Audio D1 – and a lot more than Boss’ new virtually silent Space Echo pedals.

Beyond that, our first problem is deciding where to start: reverbs and looper aside, 30 delay algorithms is quite a menu. Perhaps we should start by reassuring long-time DL4 enthusiasts that the legacy sounds are all there and sound the way they always have – or maybe a little better, thanks to analog to digital converters and updated op amps.

In fact, there’s one omission: the less-than-essential Rhythmic Delay model has been replaced by the Binson-inspired Echo Platter of Line 6’s former Echo Pro rack processor. But everything else, from the dynamics mode of dodge to oddly hostile reverse option, stay on board.

A few of the new models are just modified versions of the old ones – there’s a second Memory Man emulation that’s “more authentically tuned” to the original Electro-Harmonix pedal, and another Boss DM-2 type with a additional modulation – and the differences between different analog faux algorithms sometimes seem less than huge.

But it’s the more ambitious added sounds that really pay the DL4 MkII the way, especially if you’re using it in stereo. Euclidean mode brings trippy multi-tap textures, Multipass gives extra vibrancy to the tone filtering of the old Sweep effect, and best of all is Glitch’s random octave jump. Sounding like a defector from the Chase Bliss Habit, this one can get really rowdy with an expression pedal – just note that you’ll need one with a TS output, not TRS.

There’s also a mode called Heliosphere that adds a cathedral-like stereo ambience to the repeats – and brings us nicely to those extra reverbs. They cover all the bases, from tasteful plates and pieces to shimmering modded dreamscapes, and you can route your reverb before, after, or alongside the delay. Above all, the audio quality is excellent, making it a true two-in-one pedal.

Or should it be three in one? Yes, we haven’t mentioned the looper yet. The boosted memory makes it a much more useful performance and composition tool than the older DL4, but in all other respects it’s the same, including the ability to halve the speed of a loop. or send it in reverse using the fourth footswitch.

Without a screen or additional buttons, the new DL4 remains essentially old-school: like its predecessor, it keeps everything as simple and intuitive as possible for the user. Add bold new algorithms, a fine reverb section and instant access to three presets – six if you assign the tap footswitch like a bank pinball – and you’ve got a package whose appeal is obvious.

If your bottom line is pure tone, it has to be said that there’s nothing here that can quite match the hallowed Walrus D1 for its sheer beauty. But if you were already in love with the original green giant, you’ll love this one.

Why be afraid of Elon Musk’s takeover on Twitter?