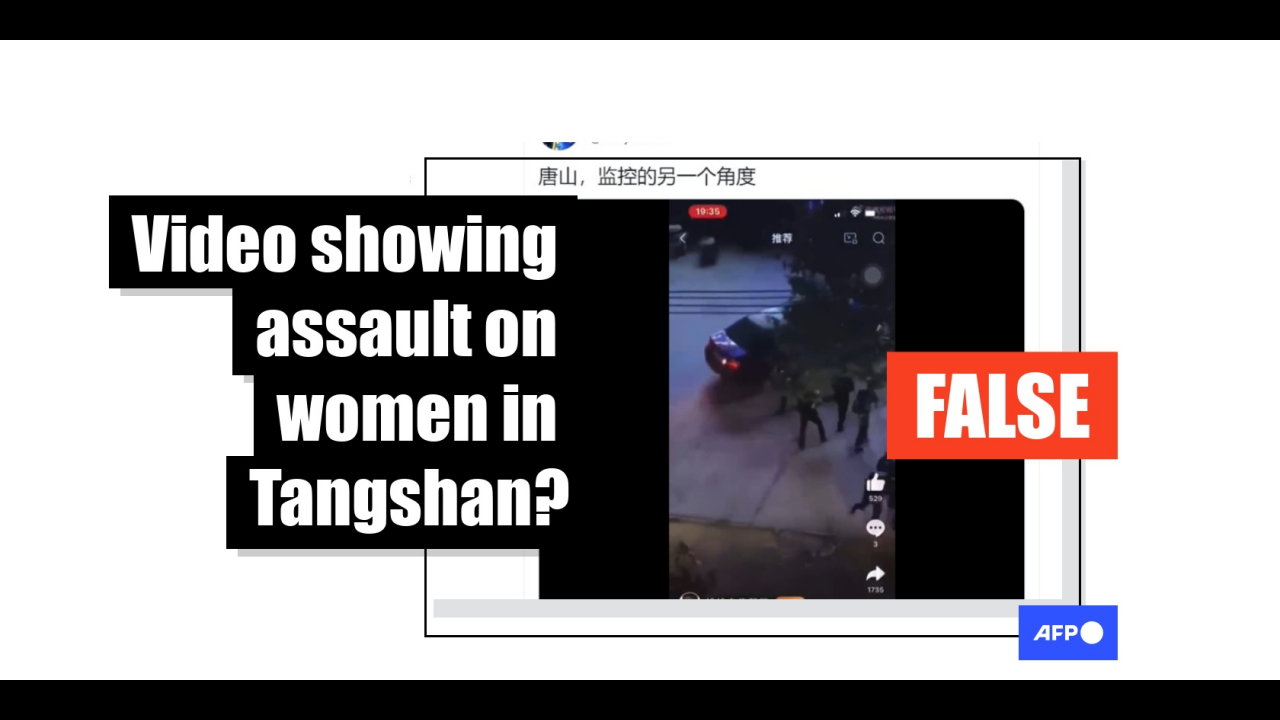 Shortly after footage of a brutal assault on several women at a restaurant in northeast China began circulating online, another video was shared by several Chinese social media users who claimed that she showed the attack from a different angle. However, the video – which has been viewed thousands of times – was shared in a false context. It has been circulating since February 2021 in stories about a man who died after being beaten and then run over in southern China.

“Tangshan, CCTV [footage] from another angle,” reads the simplified Chinese caption of a tweet posted here on June 10, 2022.

The 30-second graphic video appears to show a group beating and kicking a person lying on the ground. A black car then passes over it.

A screenshot of the misleading message, taken on June 15, 2022

The video circulated shortly after footage began circulating online of a brutal assault on a group of women who were dining at a barbecue restaurant in Tangshan, a city in northeast Hebei province. from the country.

The attack sparked outrage over predatory sexual behavior and renewed online debate about sexual harassment and gender-based violence in the country, where the conversation about women’s rights has grown in recent years despite pressure of a patriarchal society, internet censorship and unequal legal support.

Authorities said nine people had been arrested on suspicion of violent assault and “causing trouble”.

The video allegedly showing “another angle” of the attack has been viewed more than 114,000 times after being shared elsewhere on Twitter here and on Gettr here.

However, it was shared in a false context.

A reverse image search on Baidu led to this longer video posted in a report by Chinese news agency Phoenix Weekly posted on Weibo on February 20, 2021.

The caption of the post reads: “On the evening of February 19, a video of a fight in Zhanjiang, Guangdong, went viral. The video shows several people hitting and kicking the man in white in After the man collapsed, someone drove a black car over him several times.

“According to the Lianjiang City Public Security Bureau, the suspect in the case has been arrested, The victim was confirmed dead after being taken to hospital, and the matter is being further investigated.”

Zhanjiang is a city in southeast Guangdong Province, about 2,150 kilometers (1,335 miles) from Tangshan.

Below is a screenshot comparison of the video in the fake post (left) and the Phoenix Weekly video (right):

Text overlaid on the Phoenix Weekly describes what is shown in the video.

It also includes subtitles for an audio clip of an interview with a police officer starting at 18 seconds.

The officer tells the reporter that the video is real and the incident is still under investigation.

The Lianjiang City Public Security Bureau issued a notice on February 20, 2021 stating that eight men had been arrested in connection with an investigation into the incident.