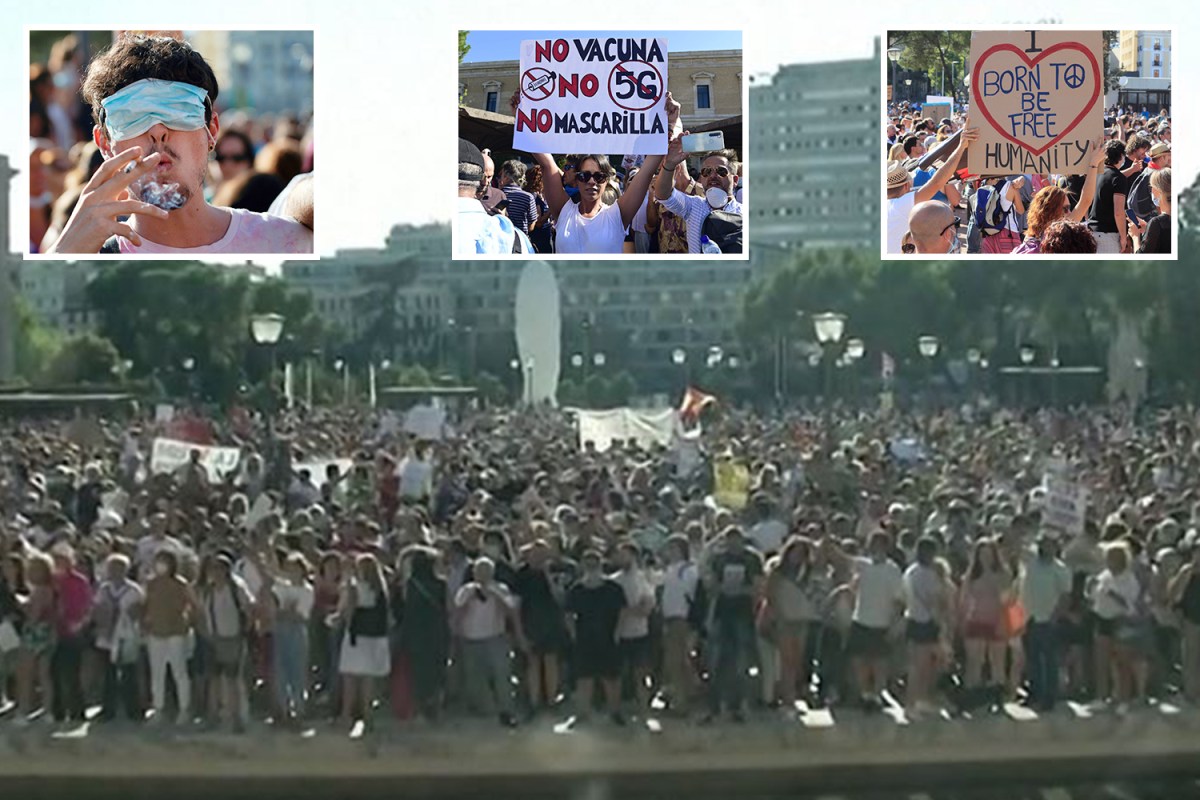 THOUSANDS of protesters gathered in Madrid over the weekend to declare the coronavirus a “hoax”.

Angry dissidents gathered over new rules that made it compulsory to wear masks, but regional security chiefs called them “brainless” and vowed they would be punished.

In the Spanish capital’s ColÃ³n Square, some 2,500 people were seen holding up hand-crafted signs saying: “The virus does not exist”, “Masks kill” and “We are not afraid”.

Pilar Martin, a 58-year-old housewife who traveled nearly 200 miles to attend the protest, said: â€œThey make us use a mask, they want us to stay home practically locked up.

“It is obvious that they are continually deceiving us by talking about epidemics. This is all a lie.”

Sunday’s march comes two days after the Spanish government introduced new restrictions on coronaviruses following a spike in cases as the country eases its lockdown.

Wearing face masks is now mandatory in public places, while nightclubs have been closed and smoking in public where it is not possible to stand two meters apart has also been banned. .

A protester was pictured pulling a cigarette with a mask over his eyes.

JosÃ© Manuel Franco, delegate of the Spanish government in Madrid, told Cadena SER radio station: â€œThere are always brainless people – in this case a number who unfortunately do not respect the law.

“I want to make it clear that this will be punished with the full force of the law.”

Mr Franco also claimed that the local government had been duped into ceding ColÃ³n Square for the purpose of the protest, with organizers saying the protest was about “censorship and freedom” rather than the anti-mask.

Anti-maskers, antivaxxers and pandemic deniers were rallied via an animated video that toured social media that used the Beatles revolution as a soundtrack, reports The Telegraph.

The campaign was also supported by Spanish celebrity Miguel BosÃ© who used his platform to advance theories on 5G and vaccines.

And according to France 24, a number of participants cited the Internet documentary “Plandemic”, which was deleted from several platforms for falsely claiming that masks and vaccines kill “thousands”.

The protest comes as coronavirus cases are steadily increasing across Europe, currently standing at more than 3.7 million.

And Spain has been removed from the UK government’s airlift list due to the increase in cases.

“WE LIVE IN THE AIR”

Breatharian couple claim to have barely eaten in NINE YEARS

From July 26, anyone traveling from Spain to the UK must self-isolate and remain in quarantine for 14 days.

The opinion is based on evidence of an increase in Covid-19 cases in several regions, including Aragon, Navarre and Catalonia – which include the cities of Zaragoza, Pamplona and Barcelona.

Fillet burst? Is the Internet fragmenting along geopolitical lines?