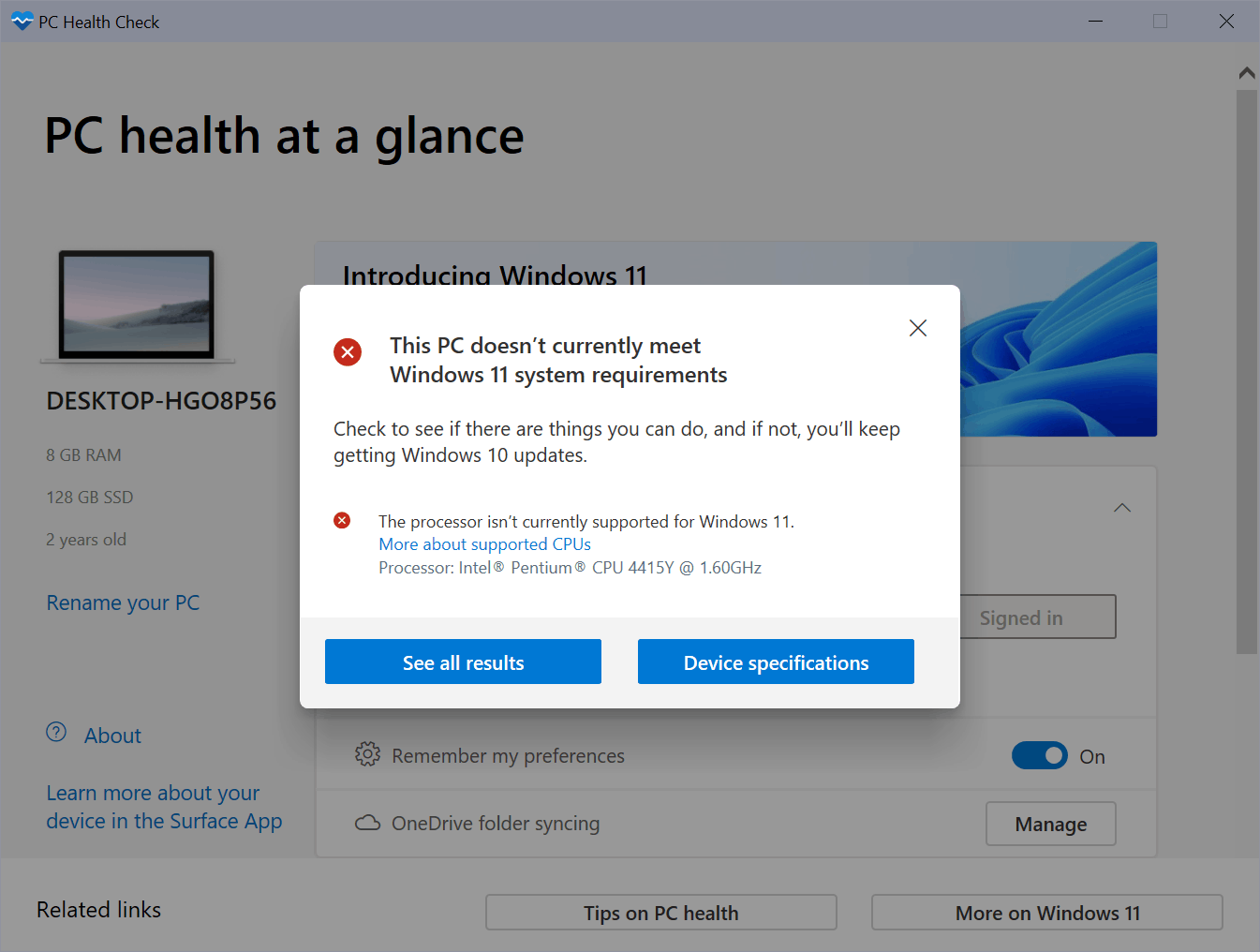 Although it is possible to circumvent the requirements, this opens a box of worms because some features may not work properly or at all, and because it may happen in the future that some updates may not be able to be installed via Windows Update on incompatible devices.

Most Windows 10 devices that don’t meet the minimum system requirements will stay on that version of Windows, but what happens when Windows 10 is no longer supported in 2025? Microsoft lists October 14, 2025 as the retirement date for Windows 10 Home and Pro (essentially all consumer versions of Windows 10). Certain users will certainly replace their devices with new ones, which will probably include Windows 11 or are at least compatible with the new operating system.

Millions of devices will still be in use by 2025, and these can’t be officially upgraded to Windows 11 because Microsoft won’t just change the system requirements for the new OS. Some users can upgrade to Windows 11 bypassing restrictions.

The main problem that Windows 10 users will encounter in October 2025 is that Microsoft will no longer create security updates for the operating system. Windows 10 devices will continue to function as before, but there will be security issues that Microsoft will not address after the latest Patch Day of October 14, 2025. Other companies, including 0Patch, may step in and release updates security for Windows 10. , but the company will not release fixes for all issues and some may not be released for free.

Continuing to use Windows 10 after October 2025 can still be a valid scenario, for example if the PC is not connected to the Internet or if the security configuration blocks most attacks before they can cause damage.

Most Windows 10 users whose devices are not compatible with Windows 11 have two main options if they wish to continue using the device:

Both options are not ideal from the perspective of a user who wants as few interruptions as possible. The first option, the unsupported upgrade to Windows 11, brings most settings and installed programs to the Windows 11 system. Most programs continue to run and data is not lost.

The main problem with this approach is that Microsoft does not officially support it. Although Microsoft has released upgrade instructions for incompatible devices, it warns users that their devices “may malfunction” and “will no longer be guaranteed to receive updates, including but not limited to , security updates”.

The official disclaimer even states that the damage is not covered by the manufacturer’s warranty and the PCs will no longer be supported in any way.

This PC does not meet the minimum system requirements to run Windows 11 – these requirements help ensure a better and more reliable experience. Installing Windows 11 on this PC is not recommended and may cause compatibility issues. If you continue installing Windows 11, your PC will no longer be supported and will no longer be able to receive updates. Damage to your PC due to lack of compatibility is not covered by the manufacturer’s warranty.

Windows Update currently works correctly on incompatible Windows 11 devices, but may not in the future. In particular, feature updates can become problematic to install, as users may need to circumvent restrictions again before they can install them.

The second option offered to users is to switch to Linux. The change requires more research and work on the part of the user: a Linux distribution must be chosen for it, which may require testing before taking action. Most Linux distributions can be run as Live systems, which will not affect data on PC hard drives.

Here are the main problems encountered by users:

Now you: Are you running Windows 10 devices incompatible with Windows 11? What will you do?

Not all Windows 10 PCs are compatible with Microsoft’s Windows 11 operating system. What happens to these devices when Microsoft ends support for Windows 10?

What is an LMS? Learning Management Systems Explained